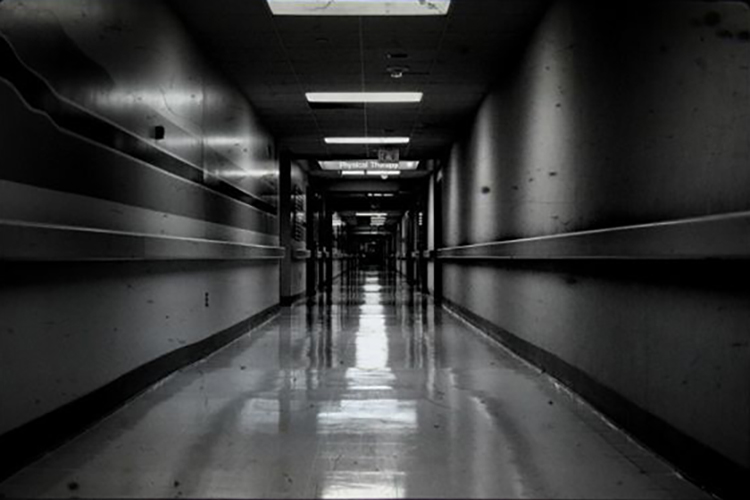 Hospital
A few months ago I went from perfectly fit and healthy to critically ill within the space of a week.

What began as a typical sore throat one morning, rapidly developed into body aches and painful swallowing by the evening.
48 hours later, I took myself to hospital and was told that my throat was covered in puss – likely just the result of a “severe throat infection”.
But after a blood test, they discovered that all of my white blood cells had disappeared, meaning there was nothing fighting the infection – and it was spreading rapidly.

The next few days were spent bedridden, staring at my veins as they absorbed an endless stream of antibiotics, painkillers and nutritional fluid.
Without a working immune system, I was extremely susceptible to other infections, so I was assigned a private room and visitors were strictly forbidden – even the staff had to wear extra PPE when they entered the room.

As the days went on, a number of scans revealed the infection was spreading down my throat and towards my chest.
At this point, the swelling had been blocking my oesophagus for almost a week and I’d lost over a stone as a result of not being able to eat or drink.

My body had become so weak that I couldn’t walk and I wasn’t getting much sleep between the quad-hourly blood pressure, pulse and temperature checks, back to back IV changes, daily blood tests, nightly scans, consistently sky-high body temperature and general agony.

Often in the middle of the night, I’d be wheeled all over the building from one scan to another, but as time progressed and potential diagnoses were ruled out, it became apparent that the doctors hadn’t a clue what was wrong with me.

After a blood test revealed that my red cells and platelets were also depleting, the doctors performed a ‘bone marrow biopsy’, which involved drilling into the lower part of my spine and scraping out a sample.
From that, they learnt that my bone marrow had stopped producing blood cells altogether.

The next morning, they gathered around my bed to tell me that the antibiotics weren’t working – they needed at least one white blood cell to have any affect, and I had zero.
The infection was making its way through my windpipe, and it was only a matter of time before I’d struggle to breathe.

Whilst waiting for an ICU bed to become available, I was given a course of stem cell injections to help stimulate blood cell growth, but they too needed at least one white blood cell to trigger a response, so there wasn’t much hope.
My mum and partner were called in and very bluntly advised to “pray for a miracle”, as there was nothing more they could do.

Death
I’d never really considered my own mortality so intensely before.
Just a week earlier, I was barely a third of the way through a long and healthy life, and now I’m told that they may have to cut a hole in my neck to prolong it.
A stark reminder that, as much as we tend to lean into the narrative that we’re in control, we are ultimately governed by external forces out of our control – something we’ve all been reminded of this past year.

As I was processing the news, I felt surprisingly calm.
Although terrified at the prospect of dying being painful, I wasn’t too anxious about the prospect of being dead.
I’d be dead, I thought, so how could I dread the sensation of not existing?
How could a journey that billions of humans had made before me be that frightening?
I thought about the people I’d known that had died and the other patients in the building gearing up to embark on the same journey, and I felt at peace.

Life
In typical death-bed fashion, as I lay there romantically curating my life’s highlight reel, I noticed that the things that usually occupied my headspace (career, money, success, validation etc) were getting very little airtime.
Instead, all of the less glamorous moments were making the final edit.
Intimate moments with friends and family, moments of personal growth, moments when I’d truly embraced who I was, laughter, love, connection and all the smaller and subtler things.

I felt a heavy sense of regret for all the times I’d wasted wallowing in anxiety, chasing other people’s validation and neglecting the people I should have cherished.
I suddenly felt as though I understood the things in life worth focusing on, and they had nothing to do with anybody’s definition of success but my own.

Recovery
Incredibly, a few hours after being transferred to another hospital with an available ICU bed, my oesophagus began to loosen slightly and I managed to swallow a mouthful of water for the first time in a week – a sensation I will never forget.
The next morning I managed a small amount of food, and gradually over the course of another week I began eating meals and walking again.

The stem cell injections had miraculously succeeded in growing a white blood cell, and the antibiotics were finally able to do their job.

After a few more days I was discharged as an outpatient and told to recover at home.
I still had to go back for regular checkups, blood tests, DNA tests and another bone marrow biopsy to try and figure out what had actually caused it all.
For a period of time, they suspected I had a life-threatening condition called Aplastic Anaemia – a rare autoimmune disease that I’d begun to accept I’d be battling for the rest of my short life.
But eventually, when my blood levels returned to normal, I was ambiguously diagnosed as having caught a ‘rare-virus’ – and that was that.
Just as rapidly as it had began, it was over.

Now, months later and back to full health, it’s easy to forget that it ever happened.
Those sleepless nights and incessant machine bleeps seem so distant, and I can barely remember the look of my face drained of colour or the rush of a fresh course of fluid flooding into my veins.

I’d told myself that if I managed to recover, I’d live the next portion of my life completely differently – abandon all toxic habits, stop looking for fulfilment in vapid places, disengage from society’s competitive rat race and start investing my energy into things that actually make me happy.
In reality though, as time passes, it gets harder to uphold that epiphany.
I expect it’s just the brain’s way of dealing with trauma but as normality begins to creep back in, I feel the clarity gradually fading.

NHS
One thing that has stuck with me though is the incredible efforts of NHS workers.
As often as I’ve heard that sentiment banded about this past year, it’s never resonated quite as much as it did experiencing it first hand.
Despite often terrible working conditions, high levels of stress and trauma, unsociable working hours, a never-ending workload and continued neglect and disrespect from the government – they continue to work diligently (often during unpaid overtime) protecting thousands of lives all over the country every day.

My local hospital was especially underfunded – broken beds, faulty equipment, insufficient basic amenities and far too little staff to be able to deliver a good service.
My room in particular had a broken AC unit and a gaping hole in the window that insects kept flying in and out of.

Given the amount of extra stress the NHS is currently under, I consider myself lucky to have even been seen by a professional.
If it had been a few months earlier or later, the capacity may not have been there for me and the outcome could have been very different.

Outro
Ultimately, my experience has simply taught me that, however old or healthy I think I am, I am not invincible.
Growing old is not an entitlement, it’s a privilege, and I’m lucky to have even made it this far.
In fact, not having existed for 13 billion years, to have suddenly existed for 29 is pretty extraordinary.
After all, we’re just floating matter, drifting unwillingly through a limitless, vast and unknown landscape, only permitted to exist (or not exist) by nature.

By writing this all down, I hope I’m at least able to cling to some of the perspective gained from my experience and use it to live the next portion of my life with greater freedom and fulfilment.