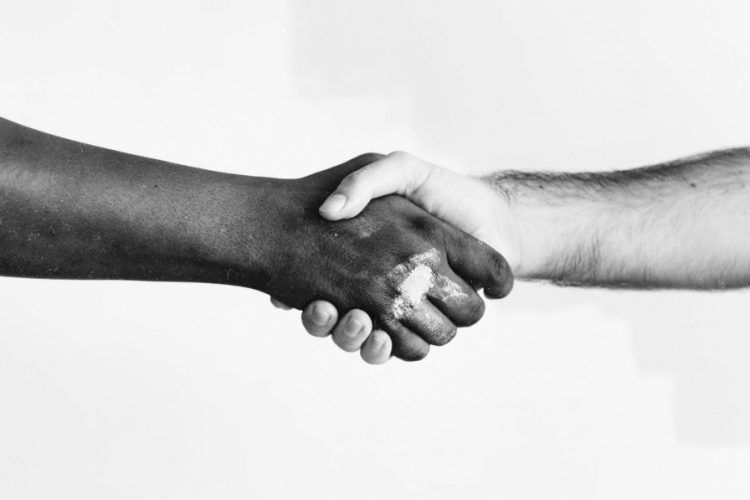 Mixed-Race
I am a mixed-race male – born and bred in Britain.
Throughout my childhood I was one of the only non-white kids in my neighbourhood, and in contrast, one of the only non-black members of my (very large) Caribbean family.
I never felt like that was a problem until the age of 5 when I was called a ‘paki’ for the first time on the school bus – a sudden and vivd realisation that it was a problem that I didn’t look like everyone else.
I did everything I could to try and fit in after that – from straightening my curly black hair every day in an attempt to appear more ‘white’, to pretending that I had darker skin because I went on holiday a lot.

Over the years, I learnt how to pander to a white-British-middle-class stereotype pretty well.
I inherited the skill from my mother, who, for her own reasons, had developed her own ways of disguising her blackness – adopting an RP english accent, disengaging with West Indian culture, regularly attending The Proms and worshiping the British royal family.
This practice certainly alienated me from members of my black family, but I didn’t feel the real effects of that until later in life as I was surrounded by middle class white people for the majority of my childhood.

Throughout adolescence, I still experienced moments of overt racism – being called a nigger, a dirty half-caste, having stones thrown at me and having my property stolen – but for the most part, learning how to culturally appropriate myself served me pretty well.
I left school with all the qualifications and opportunities afforded to my white peers and I managed to cultivate a successful career as a self-employed entrepreneur.

However, the damage that striving for ‘whiteness’ has done to my psyche has been significant.
Now as an adult, I’m left lacking a sense of identity – rarely feeling comfortable in my own skin and routinely fighting the urge to mirror and imitate whoever I’m in the company of.
I’ve been battling a form of social anxiety for most of adulthood and have developed a general habit of suppressing my instincts and craving approval from others.

It wasn’t until a moment in my twenties, when my cousin and I were walking around my childhood neighbourhood, that I realised just how disengaged I’d become with my black heritage.
Before we set off he asked me “it’s alright around here right?” – a question I hadn’t even understood at first, until realising he was asking me whether it was safe for him to walk around this area as a black man – whether his black body would cause offence to anyone in this white neighbourhood.
I was suddenly aware of all the freedoms I’d been afforded simply because my mother married a white man and I’d happened to be born with lighter skin.
Casual racism reminded me that I was brown often enough, but I’d never really had to fear for my safety in the way that my cousin had and I’d always had the luxury of being able to lean into my white heritage whenever it suited (which was all the time).

I was mostly embarrassed that I had barely noticed how different my upbringing had been compared to the rest of my black family.

Education in Britain
If I was taught anything about racism in school it didn’t stretch much further than The Nazis and the American civil rights movement – the effects of which made racism seem like it was a problem of the past and certainly not a British one.
In fact, I don’t remember learning a thing about racism in Britain – nothing about the colour bar or the race riots of 1919, Constantine vs Imperial Hotels, the windrush generation (of which I am a product of), the National Front, the Notting Hill, Brixton, St Paul’s or Tottenham riots.

Instead we were taught to admire slave traders, colonialists and racist politicians – focusing our attention on the number of wives they had.
We did learn about the British Empire but only through a pro-British lens that completely downplayed the white supremacy used to commit mass murder and crush economic development in its non-white colonies.

I never once made the connection between the racism I learnt about at school and the abuse that I’d received.

British Black History has been unfolding throughout centuries in front of our eyes, yet with no mandatory place on a national curriculum, it is somehow regarded as insignificant.
The effects of this have had powerful social and political consequences and contribute to the preservation of racism in society.

White Supremacy
A racist society doesn’t mean that every individual of a society consistently expresses overtly racist ideas – it means that social, political and economic power structures consistently impose obstacles or actively oppress people of colour.
Just because ‘nigger hunting’ and golliwogs may not be daily features of black life anymore does not mean that racism is not still very prevalent.
Society is still feeding off a long and complex relationship with white supremacy that seeks to confine people of colour to the underclasses of society.
This is why myself and so many others like me look for ways to appear more ‘white’ in order to get ahead and feel safer – something my mother understood all too well.

To those that claims they don’t see racism, I’d offer this quote from Charles Mills – “in a racially structured polity, the only people who can find it psychologically possible to deny the centrality of race are those who are racially privileged, for whom race is invisible precisely because the world is structured around them”
Then I’d invite you to read this article offering examples of systematic racism in America specifically.

If you feel a strange mix of fear and guilt as a white person reading this, that’s understandable.
Simply by a lottery of birth, you are part of a group that is used to having all of the political power and virtually unlimited privilege – now being told to listen to another group, who by a lottery of birth, is used to being oppressed and marginalised by the very system that you benefit from.

Without open discussion, confrontation and criticism, we can’t expect these things to just disappear – this is why people are protesting around the world.
In a system that serves to marginalise and oppress non-white voices, what else can black voices do to actually be heard, in response to decades of police abuse, residential segregation and economic inequality?

Racism is Ignorance
Society can be quick to criticise when the marginalised cry injustice or vilify when they act out of frustration to their circumstances.
Clinging on to centuries of anti-black propaganda that continues to feed the image of black people as THUGS, muggers and drug dealers with little else to offer society but athletic ability and musical prowess.

It’s an arduous battle for a black body to have to constantly fight ignorant stereotypes whilst trying to be seen for the individual that they truly are.
James Baldwin said “segregation has allowed white people to create only the negro they wish to see”.
Only by sincerely listening to the lived experiences of black people, the stories they’ve been screaming at deaf ears for decades, can we truly combat this ignorance.

White America’s cultural and economic power means that the world has an extremely expansive picture of ‘the white person’ – thousands of rich and diverse stories shared and accepted around the world.
Black culture isn’t afforded the same comprehensive landscape in global literature, philosophy or thought.
This is why minorities continue to fight for proportional representation in media, science, politics, art, education etc – because it sets the tone for society.

Racism is ignorance, and we have a responsibility as a civilisation to educate ourselves.